Jared and Chayanie booked us into the Levante Parliament Vienna as a gift- three nights- so after a 3.30 am start- catching a hooper bus to Heathrow for a 6am departure, then that being delayed for an hour then arriving in Vienna, catching the CAT train to the city- then the fun began.  But we walked, trammed and got to the hotel in the historical part of of the city- it's an early 19th C building revamped into colour and glass and style.  The streets are wide- less traffic and less people than London.
Service is great and we've booked for an eight hour cruise tomorrow on the Danube.  Now its sleep, sleep.
(Not sure about tipping)
Kel read up on how to get around Vienna- doing a good job too! 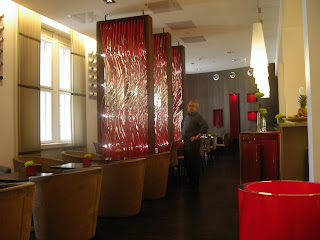 Hello there! All looks a bit flash, enjoy your river cruise! What's the weather been like?