We spent several hours in the Roman Baths building.  Such a sense of great engineering feats. 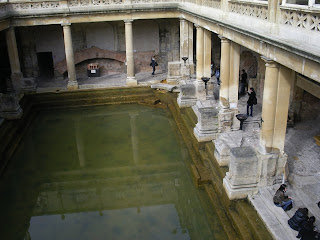 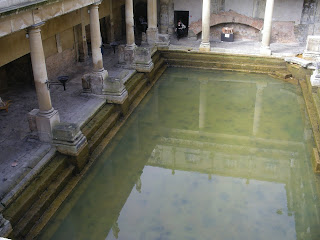 The Romans believed that the spring was a goddess- so it was with religious fervour that they bathed in the hot springs of Bath.  Aquae Sulis was the Roman name for Bath. 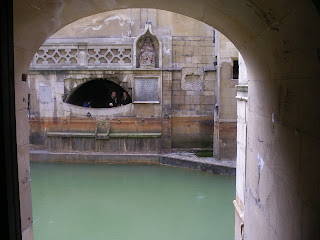 This site became the pilgrimage for many people from Europe- in fact the sick may have stayed the night in a special temple and next day recounted their dreams to a priest who then worked out a cure!
The tour took several hours- there were so many incredible pools and engineering to view- and numbers were posted at different spots to listen to the audio commentary.

Bill Bryson's extra commentary was pertinent - in fact he summed up the site in this way- my paraphrase:  if the Romans could do all this marvellous engineering, how come they took such primitive steps and examined the entrails of sacrificed animals to predict the future! 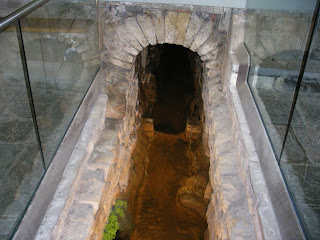 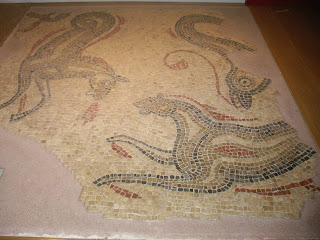 And then the final part of the tour looked at the Pump room- the Georgian taking of Bath mineral water- and we tasted a sample too.  The Pump room is now a restaurant. 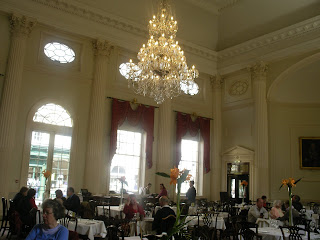 A comment from a Roman bather in 1st centrury AD is worth reporting:

'the picture is not complete without some quarelsome fellow, a thief caught in the act, or the man who loves the sound of his own voice in the bath- not to mention those who jump in with a tremendous splash'   Seneca
Epistuae Morales 56


And for me I had a sudden revealtion of how I should add more intrigue and another layer to the fantasy I am still toying with...

I loved Bath. Great revisiting it with you! And don't you just love those flashes of inspiration, wherever they occur.
Claire

Loving your travels and enjoying the juicy snippets you choose to record. But wait . . .there's more! You're also gaining ideas for your story!!
love
Janeen

I loved touring the Roman Baths - it's all so fascinating! Glad you enjoyed it :) xx