Today was steps and more steps and walking in drizzle- but the power of the Royal Crescent and Circle were amazing- we visited the Number 1 Royal Crescent Bath, set up as a furnished museum of Georgian high society.  Built by John Wood between 1767 and 1774, we watched as several tours trecked up the steep hill, took photos then trailed away.  But we went into the museum and viewed the rooms- 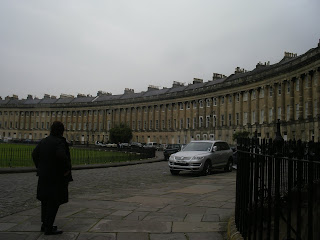 Details that stood out: patches on the lady's dressing table to cover small pox marks on lead painted faces, the culture of gambling, tea was very expensive and leaves dried out to use again, the mouse traps in the kitchen, the dog powered roasting spit and the pattens to put over shoes to wear outside in the muck and filth of the streets. 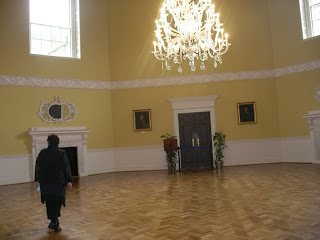 Were we all hunting for Jane Austen?
We did go to the Jane Austen centre- the tea rooms were great but the tour itself was a bit ordinary and ad hock.  But it was very atmospheric to realise that Jane walked the same streets- best to re- read Northanger Abbey.  What came through was the precarious reliance of the women on the men to provide- still saying that the Austens still could afford servants to look after them.

Today the museum in the Number 1 Royal Crescent took first class honours.
And of course today the UK nation was invloved in voting day!
Posted by Life's a poem at 07:26

hey mum - looks like you are surrounded by history